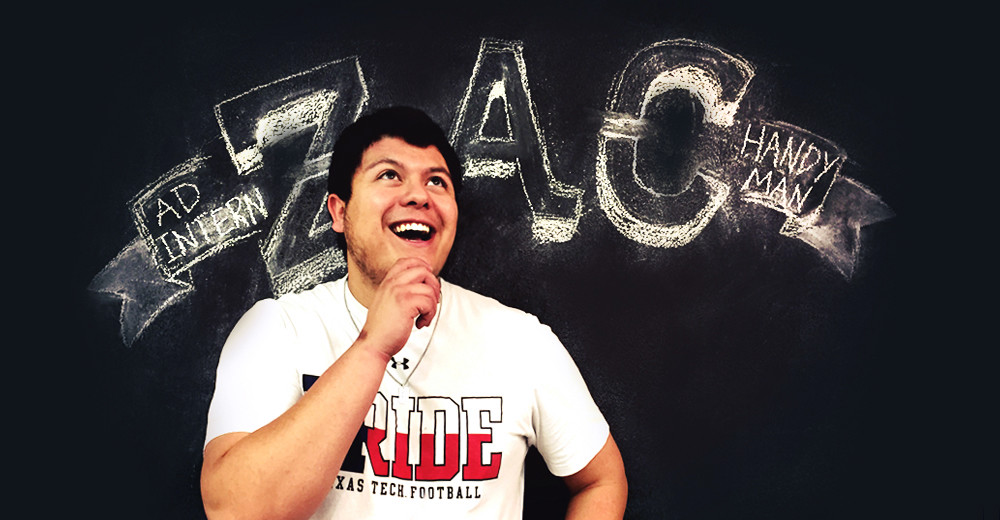 If you’ve ever wondered what’s it like to be Lloyd Caballero’s son, this post is for you:

Zac is a down to earth kind of guy who doesn’t mind even the pettiest of office tasks (even though his dad owns the company)! He’s been hanging around this office since he was born, helping us move furniture and change lightbulbs, so it was only natural to have him start keeping regular hours as our office handyman. Don’t hold your breath, but we might still be able to convince him to pursue a career in advertising, if he isn’t sick of us yet.

What’s it like working for your dad?
He’s pretty strict, but on the plus side, he usually pays for lunch.

What is the worst assignment you’ve been given so far?
I had to transcribe video. It took me a good week and was pretty frustrating.

What is the strangest assignment you’ve been given so far?
Building a ball pit.

What is the most fun assignment you’ve been given so far?
Helping shoot a video in Santa Fe. We stayed for three days. It was pretty hectic but a lot of fun.

Which TMNT character is your spirit animal?
Mikey

When you’re at a buffet, how many trays of food do you start off with?
What kind of buffet? If it’s Chinese, two or three. If it’s Golden Corral, that’s a negative, I will not eat there.

What are you secretly good at?
Mario on Nintendo. I play it on a daily basis. It’s so old the color changes on every tv.

What’s the last song played on your Spotify?
My Heart by Clay Thrash

What was the last movie you watched?
Lone Survivor